Burning Sands: A woman has disappeared

Alcander knocked at Slorm's door very worried, his brother in law woman was disappeared. She went to the river to wash the clothes, but she didn't back home.

Alcander does not want anyone to find out what happened, so asked Slorm for discretion. He will go with an Alcander's bodyguard to the river and investigate what has happened.


In this scenario they must search for clues to get information about where is she and what happened to her.

We can deploy on the table the heroes in some point and three PEFs (Possible Enemy Forces) in random point of the table. The heroes must get closer to 5cm of each one  to reveal the PEF and know if they have found a clue.

Each time a character reveals a PEF he must roll in this table, using his Wits Stat:
1-5 Nothing. Put away the PEF
6-10 Something is moving over there. Put away the PEF and put another PEF 20cm from this point, and the next time you roll for reveal a PEF you have a +5 in your role.
11 - 15 They are coming... deploy a enemy force of 1d6-1 wolves
> 16 Yo has found a clue.

The last PEF of the scenario is always a clue. 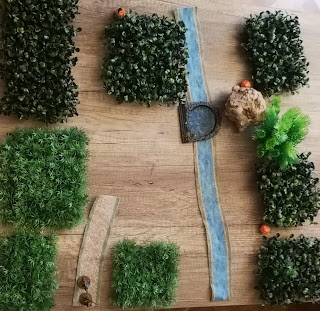 The area is calmed, and just the sing of the birds, breaks the prevailing silence. There are no fighting signals in the zone, so

The first area was empty, so they advance to the area where the woman wash the clothes, near a big rock.


At the end, the wolves are slaughtered, and the investigators find a note with strange symbols, that quickly bring to the oracle.

There, after hours of oration and magic rituals, the oracle predicts that the woman will be found in a isolated building on the North, there three nights before, a man with a brown hood had a meeting with some demons called eurynomus to organize the kidnapping of the woman...

It's time to save her