Four Against the Darkness, a review

The guys from Ganesha games have released a new solitaire dungeon-delving game, it is named Four Against Darkness, it is a pen-and-paper game where you can choose between eight classic character classes. The mechanisms are very simple, the characters only have three stats: Level, Attack and Defence. The Level bonus, in some cases, the attacks or save of the characters. The combats are solved rolling a dice and adding the bonus. In an attack the character have to get a score that must be over the Lvl of the enemy. If you hit this score, your enemy suffer a wound. With the attacks of the enemy you must hit his level adding your Defence bonus for avoiding receive a wound. And that's all.

There is a plethora of tables for generating the dungeon, the encounters, the enemies, the rooms, the treasures, the spells.... a bunch of them that let you to play alone with a pair of papers and a pencil. In the encounters you can find Vermin, Minions or a Final Boss or Weird Monster. The Minions, Final Boss and Weird Monsters let you get a level up roll that let you improve your warrior.

You can see a character that I used in my last adventure, in the character creation the player have all the control except for the initial money.

Slorm the Cleric
Level 1
Equipment: Light Armour, Shield, Weapon. You can exchange the shield and weapon with a Heavy Weapon (Two handed).
Trait: adds half of his level to his Attack rolls, and his full level when he attacks undead creatures. He may cast the Blessing spell up to three times per adventure.
Starting Money: 1d6 gold pieces.
Attack: +0
Crushing Weapon: +1 against skeletons.
Defence: +2= Light Armour (+1), shield (+1) 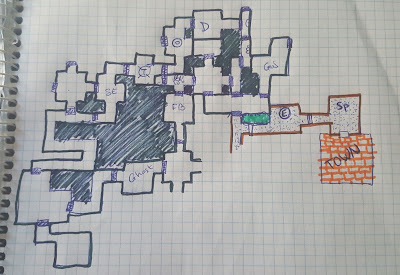 The map was generated rolling in the table, and it finished in this way. The rooms were generated as the characters entered in them.. so you never knew where were you going to go.

THE ENEMIES
During the exploration the group found a wide variety of creatures: invisible gremlins, goblin swarmlings, fungi warriors, orcs, vampire frogs, a medusa, a giant spider and a small dragon. The enemies are from several backgrounds, but nothing force you to use them like appear in the text. You can change the names and modify their appearance... the fungy warriors could be a group of orcs with poisoned weapons, the small dragon could be a Troll with a vomit attack instead the fire attack, and things like these. The stats are very suitable for representing other creatures....

THE TREASURES
After each combat, or when you find a treasure by search in a empty room, you can roll in the treasure room, and get from a bunch of coins to a magic weapon, a magic scroll or things like these... all in a very old school way.

THE ADVENTURE
This time I am not going to tell the adventure completely, but I will tell some events that happened during the crawl:
The Final Boss was a Medusa that petrified three of the four warband members... included the Cleric. The warrior survived so I decided that he could go to the town to buy a Blessing Scroll to revive the Cleric of the warband and them recover the other members. As there are no rules for this situation, I roll an Average D6 and I get a 3, so the warrior would have to travel through three forest section to arrive the Town and buy a Blessing Scroll
The forest between the dungeon and the Town is a very tight wood, so it worked as a dungeon, the trunks were so near one to others that they look like walls...
in his travel the warrior found a statue, but he was wounded and worried about his comrades so he ignored it and in the other section he fight against a Weird Giant Spider, at the end he won and get to the town.
When he came back to the room with his petrified friends, he blessed the Cleric, and them the Cleric blessed the other members... but as I considered that the situation required of some dramatic I roll in a table:
1-4 some member is not recovered
5-6 all the members recovered

and the elf was impossible to be recovered... At the end, they decided to go back home...

The game is very adaptable to be used as an outdoor dungeon, in a Mirkwood style... with the tight trunks creating walls, and the leafs working as doors... or in a Spacehulk way, creating the corridors with the same tables, just only changing the name of the creatures, and considering that the attacks are with shooting weapons... the mage converted into psionics... the clerics as medics... and heavy weapons and magic converted into high technology weapons...

PROS: Easy to play and to learn, RPG style, School, very adaptable, very few elements necessary to play (a pen, a paper, a pair of dices, a copy of the book), you don't need miniatures.

CONTRA: Maybe the combats could be to much simple because they are solved with only one roll of 1D6. The characters with high levels are possible to much powerful.... could be "burned" the encounter tables if you play it to many times in a short time, you don't need miniatures.

Highly recommended, get it here!