After my review of Four Against Darkness, and discovering the big possibilities of the games to be used with another theme.. this is the AAR of the first test of a sci-fi version for 4aD, that I have called 4aD: Space Frontier. This is a freelance version of 4aD.

The corporation Tyler-Fang Group has hired the services of 4 new mercs for a secret operation in the Third Sector, they have lost contact with the starship STS Knossos since the last two weeks, and it's necessary to go there and take a look and recover some info in the Space Transportation System.

The troops are four chosen marines: Severin Tannen: A soldier armed with the typical Flux rifle, with a light armour reinforced. Level 1 and 7 points of life.

Patrick Wachter: A physician armed with a Eclipse rifle with explosive bullets, with a light armour reinforced. Level 1 and 5 pints of life.

Ulrich Kapsner: Is the bull of the group, bearing a Salvation heavy weapon, called "Betsy", is in charge of cleaning the path... when the things get hard. Level 1 and 8 points of life.

Iris Strasburger: Is the rogue of the group, nobody knows too much about her, she is armed with a FT pistol, she is specialised hacking the computers and will be the one who could open the door if the system still works. Level 1 and 5 points of life.

The spaceship Moonsight contacted with the STS Knossos, but they didn't receive answer, so they decided to enter into the hulk. When they entered in the Space Station Transport, all was look like  quiet... Three corridors advanced into the station, they decided to choose the one of the left, they opened the door, and suddenly a group of deformed humans, dressed in medical scrubs, plenty of blood and with rotting flesh that assaulted the newcomers... the group answered firing their weapons and killed them. 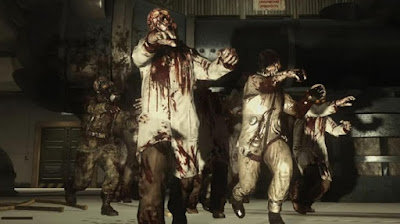 After some identifications and research Patrick said that the death corps are from the physicians of the Level 3, where they were investigating about the substance found in a spacehulk found three month ago. They must found the substance and go out from there.

The group advanced though the station slowly, walking very attentive to any noise in the corridors or in the rooms. They found some objects, that could be appreciated in the black market, so Iris decided to slide them into his bag.

Some rooms later they arrived to one of the main laboratories, there Patrick walked to touch a central computer, but Severin cry to Patrick to stop him, his sixth sense advised him about something was wrong... Iris take a look on the computer... and there were a trap... she started to hack the computer till she get to eliminate the trap and get the info for the medic...

Some hours of investigation later in the other side of the station, they found a immense creature, it look like an human but with the heigh of three meters, the group opened fire against the thing, but this time Ulrich had some difficult with his weapon that got hammed and received some wounds from the creature... at the end the creature died filling the room with its entrails...

The physician healed Ulrich, after a resting moments, the group advanced through a corridor and at the end they hear some sound like moans and drags.. they decided to enter in to the room, some bodies of zombie crawlers where awaiting to the marines... fire and death... at the end the creatures died but in that moment the door of the other side of the room exploded and appeared a terrible creature...

The fight was an epic battle, bullets, cries and blood... the creature's fangs and claws tried to impact into the marines, without success... at the end, the creature fell down, and died... Patrick took some samples and all of them decided to go out from the spacehulk... too much action for a day...

They run away from the spacehulk, but when they were arriving to the entry a group of zombies appeared but Severin through a grenade eliminating the enemies... and them, they arrived to their Moonsight. 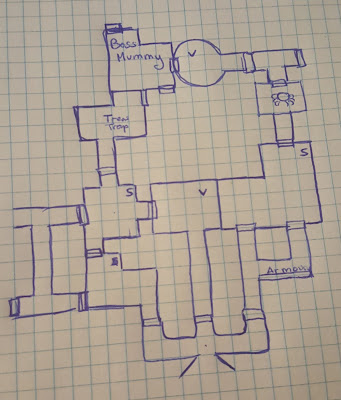 BACKROOM
To play this adventure I used the basic rules from 4aD, using a Warrior, Cleric (Physician), Barbarian (Heavy Weapon) and a Rogue. Nothing was changed except the terms and name of the creatures... the Fat zombie was a Giant Spider, the first minions encountered where zombies, the crawling zombies where rats and the Final Boss was a Mummy. The last one zombies where goblins, and al of them died in the first attack of the heroic group with attacks with a lot of six scored... for that I decided to explained the attack with a  grenade.
The levels has been maintained, only the names changed. The mechanism is very simple, so is very adaptable.