All epopee has a beginning...

The basis are been established, for now I have begun with the Jimland maps creator and the encounters from Warrior Heroes Legends and the things go in this way:

Slorm decided to go to the nearby village of Miloton to visit his good friend Acastus Zenon, he chose as bodyguards to Cleovis and Jasen, two warriors at his father service that were born in the far Thace.

After a travel of no more than five hours, the arrived Miloton, and when they were walking along the main street an old man surprised by the Slorm's showy armour call him to come closer for offering him a job. The man was in trouble, two of his guards were ill, and the last night his shop was assaulted, he could stop the raiders, but he have to go for two days out of the village to get the herbs for health the guards, and need of brave men for guarding his shop, after his return, he will pay them.

As Slorm everytime is happy to get some extra coins and during the day he'll can visit his friend, he decided to accept the job. 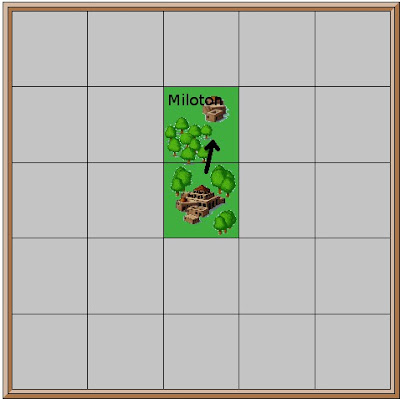