I am in the first stages of my project of painting some Prehistoric miniatures, and I was thinking about how to paint the bear skins and the skin of the miniatures.

I have two sets of Bear Clan human miniatures from Splintered Light Miniatures, armed with stone axes and spears. All of them wear bear skinned cloaks and trousers, no other trinkets. So if I have 4 models with the same pose, How could I paint them to give the armies some variety?

At the first moment I thought that a go idea could be to paint their skin with a high variety of colors, some black, some, white, and some tanned, and the same with their bear skins I could get some variety of miniatures, grey, brown and black could be the colors for have a lot of miniatures, but after looking for some info throw internet, I had to withdraw this idea, let's take a look about this.

Supposedly, these men and women lived in some point of Europe, during the late states Würm III period, after the great migrations from Africa.

With human settlements, in some place of Europe, arounding Mediterranean sea. They were in the Magadalenian period, with stone weapons, and some settlements, they were mainly hunters and gatherers.

But the low population density was low, so the genetical exchanges were very low, so the mixture of races is very low, with regular cases of endogamic relations, for that the skin of the miniatures must be painted in a more similar way.

With the bear skin we are in a similar case, the bast majority of them must be brown, with some of them black or white, but the hunter of this period hunted in determined areas, where the bears will have a similar skins color.

For that I think that the solution to establish differences will be in using green modeling putty, adding some elements, like more fur, and to paint tattoos to the troops, with a different color for each warband.

So, the Prehistoric miniatures must be modeled in a high variety of troops, because this period doesn't let to the miniatures painters a wide variety of color schemes for their armies, because of the low skin color varieties, and the natural origin of the clothes (mainly wool and furs) with no usual dye products to manufacture them, normally brown and stained white. To add a touch of color the painter must use tattoos ans decoration on the stands, this period allows imagine a wide variety of colored plants that can grow near the foots of our miniatures


Let's continue painting my monochrome troops... here is a great sample by  Carmen's Fun Painty Time, of what the terrain can do. 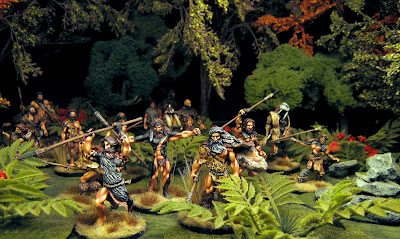