While I was looking the path to play the Weird Euskadi campaign, I discovered yesterday this entry in shichitenhakki blog. 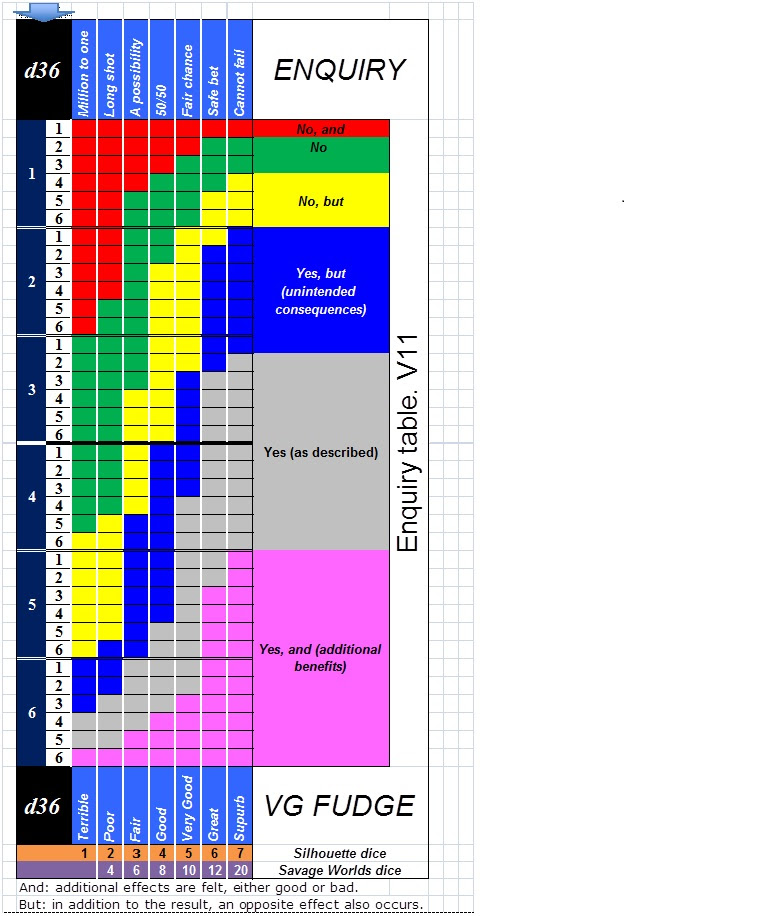 It looks like a jumble of colours and numbers, but if you pay attention you are in front of the table that is going to convert your USEME wargame in a solo RPG game, or give it a deeper aspect, if you want it obviously! Because USEME will convert in a more complex wargame system

Enquiry Table + USEME as USEMERPG
Let's take a look, we have a group of orcs with ELAN 3, that wear swords, and are patrolling by a forest. A group of elves (ELAN 4, Long Bows) have decided to ambush them. In normal conditions this scenario could be very simple (even for Ultra Simple Engine for Miniature Engagements), but with this table we can control if the orcs hear the elves, and how will they react to the attacks.

The elves are hiden, and the orcs want to find them, they roll for notice, two dice, first get 5 (blue column) and the other gets 2 (white column), we are in the second line, of the 5 group, line two; the orcs are have Notice 3 and the elves Stealth 4, so the orcs have -1, so is more difficult to notice the elves, so although the orcs are Notice 3, they will notice elves as 2. We  follow the line 2, till it cross with column 2 (Poor), and we get a result Yellow, that means Not buts....

With this rsult, the orcs can NOT find the elves, BUT the elves can't move freely, on their turn, they can only use one action for moving, or they will be discovered.

The orcs move, and the elves want to attack them with their bows, another roll in the table now comparing elves stealth vs orcs notice, no the elves have +1, because Stealth 4 - Orcs Notice 3 = 1. The rolls say Blue column 1, the white column 5, so green result, the table says NO.

The orcs arrive to the terrain element, so the elves are discovered, and the battle continue.

We can use here a Moral system, using the Guts skill, for both groups 4. It can be checked when the troops arrive to 50% loses. In our example, the elves has been crushed by the orcs, the elves must check for moral, if they continue fighting or they flee. Roll two dices, 5 (blue column), 3 (white column), result blue: Yes, but... That means: YES they continue fighting, but with the next casuality, they will flee.

Mainly for battles, we can use this table for battles. If we follow the USEME rules, the troops move on the battlefield following all the leader orders perfectly, but this is no real, let's give some chaos to the system.

The Leaders are a very important part of the battle and we must have them into account. We will buy them as normal troops, but instead of giving them a weapon, we must give them a Command stat, that can be:
Terrible, cost 2
Poor, cost 4
Fair, cost 6
Good, cost 8
Very Good, cost 10
Great, cost cost 12

So the Elves will receive the orders before, but, probably they will understand them worse.

Lets play a round

Elves leader ELAN 5, Orcs ELAN 3, so the elves move before.

Gaspar wants to order the Silver helmets to move near the forest, he roll on the Enquiry tale, an gets: 5 blue column, 3 white column, result "Not, But". So the troops didn't receive the order, but they can move with their own ELAN, with the troops that didn't received orders turn. Them Gaspar order to the archers to fire against the wild boars, rolls in the table and gets: 2 (blue column), 6 (white column). The archers can't shoot this Round. Turn for the Orcs, the wild boars receive the order to charge, 5 (Blue), 5 (White), result Yes But, the troops charge, but will fight with -1 to their ELAN. The fight takes place normally. And Obluck order to the back orcs unit to charge against the silver helmets, rolls 1 Blue, 2 White, very bad result!, "Not, and..." The orcs not charge and they start to fight against themselves, they will not act during this turn, and on next, the leader will have a -1 on their Command Rating to control this troops.

End of the command turn.

Starts the outcommand fase, the troops, that didn't receive orders, or that fail following the order can move, if they get a result of "Not, But" or if the enemy is in their ranged weapons, or charge zone. They can act normally. All the other troops can't do anything.

It is recommended that the leader will be rated between Very Good and Fair, because in other case, the troops will move uncommanded.

Just in case that you can't download the table from the original blog, here it is.

The use of this table expand the possibilities of USEME, making it a more complex