Another day in the Kingdom of Uxes. Sir Godefridus the Baron, was very happy with the Slorm's show of courage. So happy, that he decided to hire him for another mission. It was similar to the other, but this time he want three armours from a goblin dungeon that was in the North in the swamps. 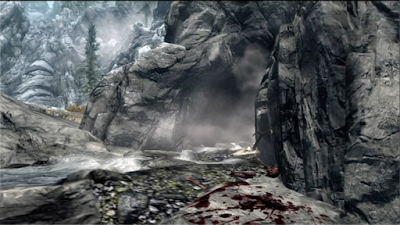 The entrance to the cave was plenty of bones, some terrible creature must live there. So Slorm took out his morning star and prepared to enter. Suddenly, as if they were waiting for him, some goblins jumped on the invader, slashes thrown everywhere, who could not touch the hero, but he killed all of them. Searching among the bodies he get an armour, one the things that he needed.

Slorm continued to a room with several doors, he tried to open some of them. At the end, two of them were open, and he decided to follow the corridor. In the room he found a lever, but decided not to touch anything, to avoid possible problems... 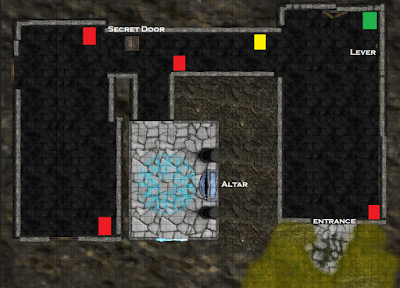 Where, looks like, that the problems come to Slorm, because a enormous ooze appeared sliding through the corridor. The combat was not delayed, and our hero could cut the creature in two parts, but this was worse, because two oozes attacked him now. After some attacks, the creature dead, but he was wounded, so decided to have a rest. 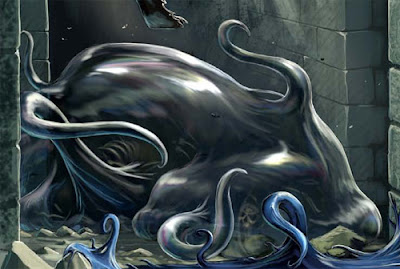 Slorm continued into a crossroad, and searched finding a hidden passage that led to a dark passage, but he decided to not enter in a so narrow passageway. A door in the south led to a room with an altar that Slorm preferred not to touch, because the gods are dangerous...

Our hero came back and found another crossroad with two doors, one of them jammed and he preferred not to touch, because it looked dangerous; so he walked into the other, when another group of goblins attacked him. More slashes and punches, killed the goblins. Another armour, this time a leather one, was kept. While he was preparing to continue, a group of giant bats attacked but Slorm defended himself, and the bats decided to flee, our hero let them go, he needed some relax.

While he took a breath, he was looking into the floor plenty of rubbish, he found something shinning, a piece of armour has been found there, so... mission accomplished!

Quickly he decided to go out from the dungeon, but while he was walking though the swamp that surrounded the dungeon, a group of goblins started to shoot his bows against to him, some arrows wounded him. At the end, our hero severely wounded needed some health potions to recover himself, lost in the swamp, there were a lot of possibilities to die...

After some hours of wandering, he found a hamlet, where he could health his wounds.