After a pair of weeks reading  a lot of posts about epic, I have decided to dust off my 6mm miniatures, I have a bunch of Eldars, and DRM miniatures.

Some Eldar's photos are here, as you can see, in the other side, there are some DRM miniatures with Small stands from FOW. I love those bases, they are small, but with sufficient space to put 6mm, 10mm or 15mm.

I was thinking about what stands use for the new miniatures that I wanted to base, they are Kraytonians Light Infantry, that probably I will use as Space Marines. I tried basing them on the standard 2x2 Epic stand, here is the photo 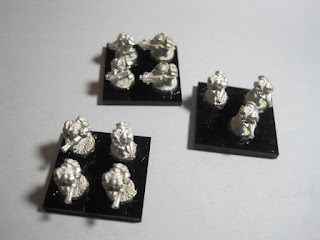 If you take a look on them, you can see that the miniatures are bulky, and looks like a little squashed, even though, if we based them in a small FOW stands, there are space to put some terrain scenery like rocks, or fences, so on...  Here is the photo 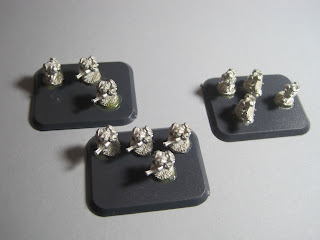 We have the other Epic possibility 4x1.5 narrow stands, that you can see in BlackSmith blog, I dislike them a lot, they take a lot of space in the battlefield, and I have not much of it, and you can't put any terrain on them, moreover, paying attention to the low variety of posses the five miniatures there looks like more a group of mannequin than a squad of brave warriors in the middle of a battlefield.

In conclusion, I think that the 2x2 stands, and 4x1'5 stands make your troops look like a bunch of markers instead of mobile and semi alive troops, with these other stands FOW small bases, you can give some variety and battlefield look like to your armies.

Let's take the paintbrushes and give them live