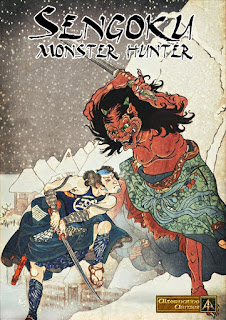 The mythical culture of Japan is a not a well known setting in Europe, Greek and Viking mythology makes a clean sweep of the ancient gods for those of us here… but now arrives Alternative Armies to give us a new rulebook with this Japan setting and plenty of Sengoku mythical monsters and warriors.
The book outlines a Japanese medieval world, were we, the hunters, are hired to hunt monsters to clean haunted forest or to save the honour of fallen from grace samurais… To bring about this task we will be able to hire some specialized followers to help us. Will you dare to fight against the monsters and take up this challenge?
The game is suitable for solo wargamers, or groups of hunters where each player will deploy his hunter and followers, with the monsters moving following an easy ‘silent player’ or A.I system.
Our hunter will is described by a profile with these stats: Actions, Move, Combat, Shooting, Wounds and Resolve; with a value between 3 to 6. Each activation will let us to make as much actions as we have in our Action stat, walking so many centimetres as show the Move stat. The combat, either melee or ranged shot, will be resolved rolling as much D6 as our Combat and Shooting stats put out. Looking for 4+ in each one. Moreover, we must equip our hunter with various typical Japanese weapons like the tanto, naginata or ninjato, and armours.
The hunter will be long to a hunters guild, or will be a warrior monk or a Lone Warrior what will give him special rules and obligations, improving his attack or requiring of the payment of taxes to maintain the belong to the guild. Guilds are central to the hunter.
The enemies are represented by ‘markers’, who move in uncovered until they are in the line of view of the hunter or followers. At this moment the monster is reveal and deployed and it will follow the Monster animal table as followed by him the hunter. Alternative Armies has Sengoku Tokens which are also coins and bases for this use.
The hunt will be developed in a squared 60cm or 80cm for 15mm scale, which represent the lowlands, the hills or the mountains, with at least 4 markers in the lowlands, and 8 markers on the mountains. As much markers, as more experience points are earned, so the hunter wins more awards. The hunt can get bigger!
With all the awarded points, the hunter can improve his skills, the quality of their follower, and more things… because this wargame is outlined as a campaign, where the hunter will be improving his skills to hunt bigger and dangerous monsters. You can take your hunter on a journey of experience.
The book has more than twenty creatures to make life impossible to our hunter, with their stats and special rules, between Oni, goblins, skeletons and the terrible Kasa Obake…..
From my point of view, the rulebook is a great choice for the solo wargamers who are looking for a ruleset to play little encounters with no more than 5-10 miniatures per side, with a hero bearing all the weight of the scene. The book is suitable for the Japanese mythology neophyte, because avoids a lot of Japanese terminology, using European terms for the weapons and armours. Besides, the monster stats are suitable for other mythological monsters, so the rules are suitable for the Greek or Viking mythology, or other settings like a Fantasy game where a hunter is hunting witches in the middle of the 16 century. From my point of view the metagame about the campaign is very motivating, and inclusive, with the player having to save experience points to pay the food for his followers, or having to quit from the Hunter Guild because he can’t pay the taxes…
To me as a Spanish native speaker the downside is that the rulebook sometimes a little dense in the reading, with some points not too clear to me, or with the information not all in the same part of the book, like, for example the number of markers for each scenario. But I was helped and I got the answers. The thematic style of the book could not be for every wargamer, so these wargamers will miss out on this great and easy wargame. So I say give it a chance and you can be helped if you ask Alternative Armies.
In summary Sengoku Monster Hunter is a must have for all this solo wargamers, who wants to go out with the little guys to hunt some bad demons and creatures from the dark corners….